These are beyond unsettling.

Art is highly subjective. No longer do we live in an age where art is only confined to close-ups of fruits, landscapes and people but now, we live in a time where deeper subject matters like dream-like states, mental illnesses, vivid surreal realms and dark psychological tendencies are highly welcomed. People have branched out of traditional art mediums and have interpreted styles that can deal with really dark visions. An artists work can be inspired by several forms of media like the scenes from a movie, a memory that is blurry in their head, video games and even music. Of course, melancholy is a chapter of art that can take anyone perceiving it into a rabbit hole of unsettling observations. Melancholy can not only be depicted by a portrait of a sad person sitting next to a window while it rains outside (that’s the most familiar melancholic setting someone can think of). But artists love to depict it by using non-conventional means too. By choosing the medium such as curvy or straight lines, the type of paper, the type of drawing mediums such as pens and papers, the colours and if not, the gradient and with the digital age finally letting artists create and manipulate dark subject matters in any direction they like (2d,3d, physical, film etc). The good surreal art keeps on coming in.

So today we look at the work of Virginia Mori. A 36-year-old woman who makes surreal and psychologically disturbing artwork that depicts a very bleak melancholic and nightmarish mood. “It has been a long and slow journey filled with a lot of research, but everything came very naturally, in a very instinctive way. I just followed what I like to do,” she said while also stating “I can’t say how I arrived at this style,”. “I am not trying to explain anything with certainty with my art. I just want to suggest strange feelings and situations in a metaphoric way.” she also added. Her choice of medium for her artwork was Pencil, ballpoint pen, ink and paper. Her artwork also depicts a small girl going in and out of surreal sequences.

Let’s have a look at her work and try giving some of our own interpretations of her work.

1. The rabbits storm her as she rests in the field. It looks like this girl has accepted her demons because she cannot deal with them anymore.

2. Multiple replicas of herself she lives through each day, the faces she puts on while somewhere inside she’s sleeping.

3. She’s hollow on the inside and everyone around her can notice.

4. The human centipede but creepier.

5. Her demons won’t let her escape. 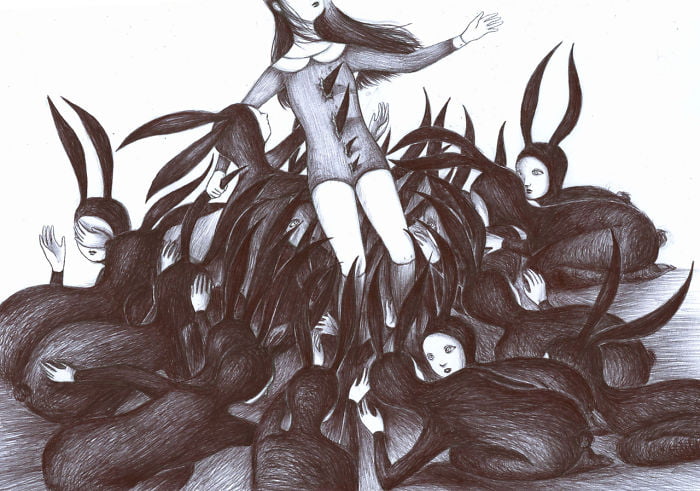 6. Her head is always spiralling out of control.

7.  Her demons suffocate her.

8. The cringest of horrors.

9. She’s nowhere safe. They always find a way to creep in.

10. Always a slave to something. (Every cat owner ever)

11. A blurry memory she can recall from any angle.

13. When your cat claims your bed and lets you sleep with it.

14. Every step she takes is a painful one.

16. The sound of music, her favourite tunes steal her soul.

17. Always on the border until it starts separating you.

Virginia Mori has used very straight lines in her artwork throughout. Her linework is rough in some parts and complete in others and by the combination of ink, she gives all of her artwork a retro horror theme, Most of her illustrated work resembles a horror movie. Her style is very reminiscent of Japanese horrors like Ju-on, The ring and the anime unsettling of the perfect blue. As a matter of fact, someone who wants to see her work in an anime setting can tune into A perfect blue as it works with really similar surreal concepts of Virginia. Where the protagonist keeps on dealing with a split of surrealist realities and the hard real-world itself, Ideas of self and ego are looked into. With most of her on display here, Virginia’s makes her artwork appealing to anyone brave enough to look into her artwork. Anyone can relate a dream they had or a memory that’s blurry but the person can still picture it. But for people suffering from mental illnesses like borderline personality disorder, schizophrenia or any sort of disorder that deals with anxiety can relate to her work on a higher level. Because in most of these illustrations you can see the protagonist (little girl) dealing with her demons while being submerged into a twister of the dream-like state that people suffering can often relate to when they hit their peaks or have a sudden loss of sleep. Scroll down below for more of her work.

21. Floating onto the infinite.

24. They’re always waiting for her. Cats actually wait for you like that once you start giving them food and care.

26. Let’s be honest, we all read books like that when we’re really into a book.

28. Birthdays shortening the years you have left.

29. A lucid dream that keeps you hanging.

31. When you’re a musician and you intrument is your canvas.

32. Sleeping with yourself while having a split peronality disorder.

33. Emotions bigger than the world.

34. Always letting other’s get the best of you.

35. Being forced to do something that discomforts you.

36. The challenge to be better than everyone else.

37. A nightmare taking off.

38. The self disposed at the table.

39. Latching onto things that don’t appeal to you and hurt you.

With that, we conclude this article. Virginia Mori’s work is excellent and it keeps a fine balance between reality and a dream that slowly dwindles into a black hole of surreal episodes that bend and challenge the very fabric of sanity. Let us know in the comment section below about what you interpret these illustrations and if you’ve ever experienced something like this?